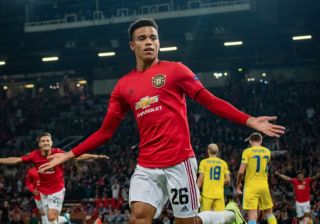 Not the most convincing of displays as Manchester United just about cross the line against FK Astana.

It took a goal from 17-year-old Mason Greenwood for the Red Devils to start their Europa League campaign with a win.

Although chances were created from the early stages of the match, United yet again showed they lack a real goalscorer in the first team. It wouldn’t surprise us if Greenwood started at the weekend.

Another name deserving of a mention is Angel Gomes, who didn’t deserve to come off in the second-half. Perhaps Ole Gunnar Solskjaer has him in mind for Sunday’s Premier League clash against West Ham.

It was a below par performance overall but there were some fine individual displays.

Astana leave with nothing but they can be happy the result didn’t resemble a crick scoreline.

Check out the tweets below as United fans react to tonight’s 1-0 win.

imagine struggling against Astana at home 😂.Banter club this is, Westham is calling 😎

Not that bad of a game tbh, the team parked the bus, hard to break down but overall the main thing is that we won and Mason scores a beautiful goal 😍❤️ #thebigdaddy
Rojo has been lit today, defo deserves a start against West Ham.

So delighted for Mason Greenwood with his goal, been waiting such a long time for that moment. Fully deserved it! It's his night tonight 🙌

It was meh. Ole would have learnt, again, more from the negatives than the limited positives tonight, but Greenwood did what we hoped he would, take the chances that come this season. Gomes is developing though. MOTM? Clearly @TRA_MUFC and hey, 251 days until Gdansk, Reds!