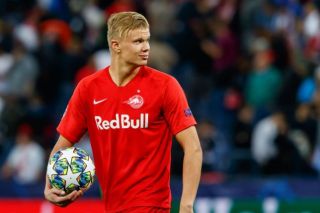 Erling Braut Håland is Europe’s most popular striker this week after scoring a hat-trick in his Champions League debut.

The Red Bull Salzburg forward had a night to remember as his side ran out 6-2 winners against Belgian opposition Genk.

Håland, 19, played under Ole Gunnar Solskjaer at Molde and there’s been plenty of talk about him attracting interest from Manchester United.

Moreover, United could definitely do with another striker in the squad — but perhaps one with more experience knowing Anthony Martial and Marcus Rashford are both still bubbling with potential.

Solskjaer was asked about Håland in his press conference on Wednesday. He said: “It was nice watching the game last night. It was great watching him. Everyone in Norway is excited about his development.”

Of course, after handing Håland his first team debut at Molde, Solskjaer has already played a role in his development as a player thus far.

The question is will he have a greater influence by one day taking him to Old Trafford?

Håland’s dad is Alf-Inge Håland, known mostly for his run in with former United captain Roy Keane. He played for Leeds and Man City so you can imagine Erling grew up in a household not very appreciative of things red…

His father has told Norwegian press that he would put any of his own club rivalries aside in the interests of his son’s career. Speaking to TV2, he said: “It would be nice. It is important to distinguish between being a supporter and a job. So I have a very relaxed relationship with that. It’s a little different when it’s serious.”

He added: “Yes, I think most players dream of being in the Premier League at one time or another. It’s the league that gets the most attention around, and it’s very good quality of the teams. There is no doubt the Premier League is attractive to him.”

By that alone, it sounds like a move to United is possible, and Solskjaer being manager could have a huge influence on that.

The hat-trick he scored on Tuesday night was his fourth of the season. That’s a phenomenal goalscoring record and one that shouldn’t go under the radar just because he’s playing in Austria.

Håland now has 17 goals in 11 games for Red Bull Salzburg. His stock is about to rise significantly and you can be sure more clubs will be sending scouts to watch him perform over the coming weeks.