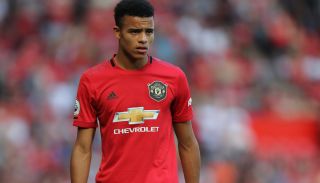 As expected, there’s a lot of young players on the team sheet.

It will be an academy front four for United, with Mason Greenwood earning his second senior start in a competitive game. The exciting striker is expected to get plenty of game time in the Europa League and League this season and we are thrilled to see Solskjaer use these competitions to blood the young members of his squad.

The defence is full of players we’ve yet to see this season, so it’s a chance for everyone to show the manager that they should still be in contention for team selections. Sergio Romero has always been a reliable second choice to David de Gea, especially in the Europa League (2016/17), while Diogo Dalot and Marcos Rojo return from injuries to take up the full-back positions. The centre-back partnership sees Axel Tuanzebe and Phil Jones in the heart of United’s defence.

Fred gets his first start of the season alongside Nemanja Matic in midfield. Both players have a lot to prove, but the Brazilian is surely playing for his United career this season while his partner tonight probably knows his days at Old Trafford are numbered under Solskjaer.

The trio behind Marcus Rashford includes Greenwood, Angel Gomes and Tahith Chong so we can expect lots of creativity in front of goal.

See the full team listed below, via @ManUtd on Twitter.

Let the shackles off, lads! Come on United!