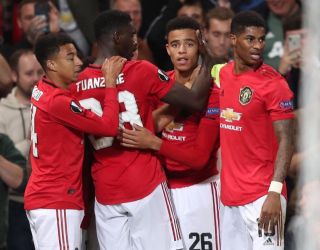 Axel Tuanzebe spoke to MUTV after Manchester United’s 1-0 win over FK Astana and praised manager Ole Gunnar Solskjaer for having faith in youngsters.

The defender says United had to adapt to their opponents’ defensive setup, but that doesn’t exactly excuse the amount of opportunities wasted throughout the game.

“I think they had a good tactical setup,” Tuanzebe said as quoted by the Manchester Evening News. “They knew coming here would be difficult for them, so they sat back and defended their box which worked for most of the game. We’re just happy to get the three points and young Mason showed his talent and got us the goal.”

That player is Mason Greenwood.

The 17-year-old scored the only goal of the game as United took three points from their Europa League opener.

Tuanzebe continued to praise Greenwood in his post-match interview, saying: “We see him doing it day in, day out so we have confident in him, the manager has confidence in him. It’s good for him to portray his talent and good for him to help the team win.

“It’s amazing [starting give academy players], it’s what the club’s about. It’s our identity. We want to bring young players through, confidently, and the manager has faith in his young talent which is important in the training ground saying ‘if you’re good enough, you’re old enough.”

Ole Gunnar Solskjaer can take credit for giving youth minutes but against a poor side like Astana, United really should be putting them away early on in games like this.

We’ll take the win and move onto Sunday’s game with West Ham hoping to make it three victories on the trot.

Tuanzebe put in a good display alongside Phil Jones but neither were really troubled.

Tonight’s performance should tell us not to underestimate Rochdale in our upcoming League Cup clash.