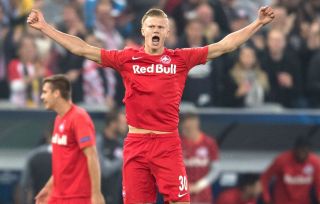 There appears to be a new wonderkid taking European football by storm and Ole Gunnar Solskjaer knows a thing or two about him from his time managing Molde.

The name worth remembering is Erling Braut Håland of Red Bull Salzburg, who made last night all about him in the Champions League.

The son of Alf-Inge Håland played under Solskjaer at Molde but has since moved on to the Austrian giants Red Bull Salzburg, and is sure to a conversation topic at a number of clubs after his display against Belgian side Genk on Tuesday night.

During a brilliant first-half in which Salzburg destroyed Genk, Håland hit a hat-trick in devastating fashion.

Now according to OptaJoe, the 19-year-old has become the youngest player to score a Champions League hat-trick behind Real Madrid legend Raul and our very own Wayne Rooney.

In his first ever Champions League game too, which means he also equalled Rooney’s record of being the first teenager since the Englishman to score more than once on his Champions League debut. Wazza hit a hat-trick for United against Fenerbahçe and suddenly we knew a star was born.

Solskjaer was quick to praise the youngster after he broke onto the scene for Molde, saying: “He can become a top striker, for sure. He reminds me of the type of striker Lukaku is,” which may hint at the Manchester United boss not wanting to go back down that route again…

But scoring goals for fun is becoming a trend for the young Norwegian with his tally amounting to 17 in nine games so far this season. Not to forget his nine goals in one game during the U-20 World Cup.

Back in 2018, Solskjaer said: “He is probably not the world’s biggest Manchester United fan, but if they come to the door, there are not many who say no to that.”

The striker, known to be a Leeds fan, admitted: “I want to be the best. The dream is to win the Premier League with Leeds — and to be better than dad.”

If Erling continues scoring goals at this rate, he will get his big move and definitely eclipse his father. His stock is set to soar after his Champions League treble and we’re sure Solskjaer will be dropping his former striker a text at point this week as Manchester United prepare for their Europa League opener against FK Astana.

Quotes from the Mirror.