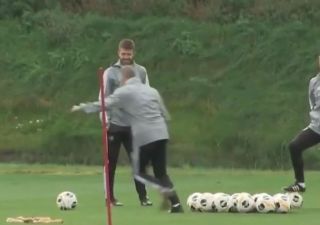 He never lost it, our Ole!

Having Ole Gunnar Solskjaer coach our young strikers should do them all the world of good. There’s a lot of pressure on Anthony Martial and Marcus Rashford to provide the goals this season, and a lot of that comes down to Manchester United not signing a replacement after letting Romelu Lukaku leave in the summer.

But Solskjaer has to work with the players he’s got available.

Martial may not be available to feature in United’s Europa League opener against FK Astana on Thursday night, so Rashford is most likely to lead the line while The Sun claims Mason Greenwood will get his second senior start in the a competitive game.

Cameras were on all of the lads at training this morning since it was open to the media. They’re scheduled to ask Solskjaer questions for his pre-match press conference at 13:30.

Solskjaer was spotted attempting a trick shot during the training session, which he pulls off with great success.

The Norwegian coach chips the ball into a bin with Michael Carrick watching on.

Check it out below (via Sky Sports News):

Ole hits a trick shot in training! from r/reddevils