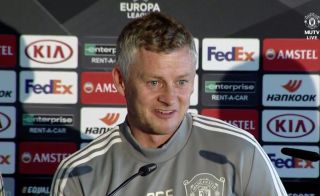 Ole Gunnar Solskjaer dropped a few hints about his team selection for Thursday night’s Europa League opener against FK Astana when speaking to the press on Wednesday.

The journalists were all trying to get team news from the manager, who joked about revealing the entire starting eleven to take on the champions of Kazakhstan.

Not that revealing the team should make any difference to the result (second-rate competition and we’re up against a team we should be hammering), but he gave us some names that will be in the starting line-up.

Firstly, Solskjaer confirmed that Sergio Romero will be between the posts tomorrow night. The Argentine has proven himself in the Europa League before when United won the competition outright under José Mourinho in 2017.

“Sergio will play for tomorrow for sure, he’s proven top be a top top keeper behind David [De Gea] and keep him ready if something happens to David,” Ole said, as per the Manchester Evening News. “Time for him to have some much needed game time.”

The manager also revealed that Axel Tuanzebe and Mason Greenwood are in line to start the match. Tuanzebe, who is back from a successful loan spell at Aston Villa, during which they gained Premier League promotion, has yet to feature for the Red Devils this season. Then there’s Greenwood who is line for his second senior start.

“He [Axel] is going to start. We’ve got a big squad, pre-season went really well. Axel is one who didn’t make the starting XI so now it is a chance for them top get some minutes. We will see the sue of the squad more, there will be some young ones tomorrow. Greenwood will definitely play.”

Neil Curtis of The Sun asked Solskjaer whether Greenwood can impress enough to become a regular in his side this season. The boss responded with the following:

“He’s still very young but he’s maturing and he’s developed so much since I came in. The kid who just wanted to play with his mates in the U18s and now he’s knocking on the door wanting to play more. His appetite for football is growing, I don’t want to put too much pressure apart from go out there and enjoy yourself and work hard. He’s one of the best finishers I have seen go out at Old Trafford and enjoy it.”

Solskjaer also hinted that Brazilian midfielder Fred could start the game. He needs game time after an array of abysmal performances last term following his transfer from Ukrainian side Shakhtar Donetsk.

Fred came on as a substitute during Saturday’s 1-0 win over Leicester City.

“Fred he came on well, we needed his legs and sharpness,” Solskjaer added. “He has been patient, he has been working hard. He is not a young boy, but he is young in his English career. I am sure we will see more and more of him. He’s had some great games in midfield so we are just waiting.”