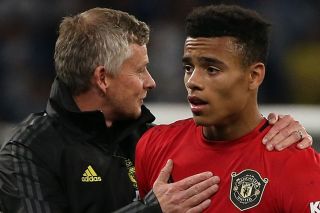 The Europa League should give Ole Gunnar Solskjaer the chance to blood youngsters for the future.

I wouldn’t go as far as to say the tournament is unimportant, but it is second-rate and we should be using it this season to prepare our young players for European football at a more prestigious level. The Champions League.

Admittedly playing on a Thursday night and having long plane journeys is not ideal, but it will give some of our fringe players a super chance of getting minutes on the pitch and earning valuable experiences in the process.

The Sun claims Solskjaer is set to give Mason Greenwood a start against FK Astana this Thursday night. We’ve seen Marcus Rashford take his chance in the competition under Louis van Gaal, not to mention Harry Kane for Tottenham, so this could be huge for the latest United academy graduate to excite fans.

This could determine if Solskjaer can trust his young striker for the other Europa League games which will give him a further chance to impress. That is his route to getting more minutes in the Premier League, when / if United have to deal with more injuries up front.

It could also persuade Solskjaer to wait until next summer to sign another striker after losing Romelu Lukaku towards the end of the transfer window just gone. There has been talk that United will make a move for a new forward in January, but it would be great if Greenwood impressed enough that the manager didn’t feel the need to buy someone that would suddenly overtake him in the window transfer window.

Although he’s yet to score for the first team in a competitive match, he has been prolific in every youth team he’s played in and was excellent under Solskjaer during the pre-season tour.

Greenwood is one of the youngsters coming through who is tipped for a bright future at the club. Solskjaer already rates him as our best finisher, though that probably says more about Marcus Rashford than anything.