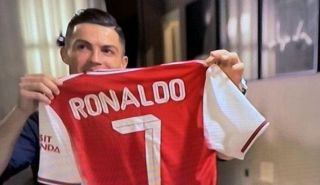 No need to apologise. Joining Arsenal would have been a mistake!

Cristiano Ronaldo was ironically presented with a CR7 Arsenal shirt by Piers Morgan during their interview on ITV.

The former Manchester United star had a long chat with Morgan and one of the many topics they discussed was how close Ronaldo came to joining Arsenal before leaving Sporting Lisbon for Old Trafford.

Ronaldo, now one of the greatest footballers of all-time, blossomed into a world beater before joining Real Madrid in 2009.

Currently at Juventus, Ronaldo has done a big interview on his late father and the rape allegations that have followed him for the past year.

He told Morgan, as quoted by Goal: “It is true (about being close to joining Arsenal). Of course it is true. Very close. One step. Seriously.

“I want to apologise. Forgive me for not joining Arsenal. It didn’t happen, but Arsenal, I appreciate what they did for me, especially Arsene Wenger, but football you never know where you are going to play, life is like that.”

We’re just grateful he ended up at United and grew under Sir Alex Ferguson instead.