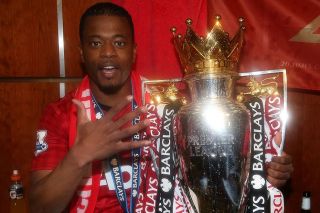 Patrice Evra has set a deadline of sorts for Manchester United to win the Premier League again.

We’ve not won the league since Sir Alex Ferguson’s final season in charge (2012/13), and haven’t come close enough since the legendary Scot retired from management.

José Mourinho delivered our best finish since, however, finishing second behind Manchester City in 2017/18. The Portuguese coach went on to claim that was one of his ‘biggest achievements’ despite finishing 19 points behind Pep Guardiola’s side.

Evra knows what it takes to win the league in England and was part of that 2012/13 title-winning squad. He has now warned the players this club must not go 10-years without lifting the trophy.

“We are a big club. We want to win trophies,” the Frenchman told Sky Sports.

“We don’t want to spend more than 10-years without winning the league again. It’s not easy but the fans have to believe — it’s a process.”

Time is always running out and United won’t be lifting any league title this season.

Ole Gunnar Solskjaer needs to be trusted with the squad after signing three very promising players in Daniel James, Aaron Wan-Bissaka and Harry Maguire. Having Evra around — currently doing his coaching badges — should do all of them the world of good.

Patrice Evra on why he’s back at United completing his coaching badges: “I want to make all the players know when you wear that shirt you understand the history on your back. I’m here to make sure people understand what it means to play for this club.” [men] #MUFC pic.twitter.com/D4x4PIGLb9

The Norwegian coach must now continue to strip the deadwood from the squad and replace those players with upgrades, something he wasn’t allowed to do in the summer following the exits of Ander Herrera, Marouane Fellaini, Alexis Sanchez and Romelu Lukaku.

It really is no wonder the squad looks so thin right now.

This season will make it seven years without the title, leaving it another three years to get our act together and compete with Man City and Liverpool.