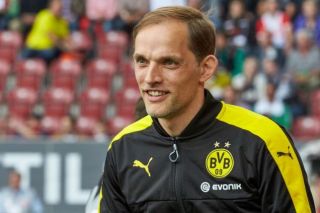 An incredible start to life as manager at Old Trafford saw United win 14 of their first 19 games under Solskjaer, who then got the job on a permanent basis in March.

The former striker was handed a three-year contract, although reports in France suggest United have their eyes on another manager.

Solskjaer’s job is not under threat by any means, but I take this as a positive thing that Manchester United are being proactive and watching out for managers and trends around footballing styles.

The brilliant Sport Witness have translated a report from Le10 Sport which claims the Red Devils and Barcelona ‘have eyes on’ Paris Saint-Germain boss Thomas Tuchel, formerly of Borussia Dortmund.

The report also signals a fair amount of pressure on Tuchel, who led PSG to Ligue 1 success in his first season in charge, yet that’s not considered good enough by those in power at the Paris club.

Unless PSG have an exceptional season, which probably includes winning the Champions League, Tuchel will be axed at the end of the season.

That seems crazy if he still has them dominating the French league — and before anyone suggests that it’s a league full of farmers, it’s not… and winning the Champions League is never going to be easy. Not when you’re coming up against teams far superior than most in your domestic division.

United knocked PSG out of the Champions League last season in the last 16. Not reaching the semi-finals this season would be deemed failure on Tuchel’s part.

But these reports suggest he won’t have much difficulty finding work elsewhere.