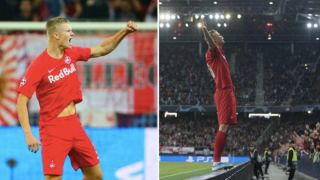 The Red Devils are light in attack after losing Romelu Lukaku and Alexis Sanchez without signing any replacement, so there’s more pressure than ever before on Anthony Martial and Marcus Rashford.

If Martial or Rashford get injured the pressure goes to academy graduate Mason Greenwood, who has only made one start in a competitive game for the first team this far.

Moreover, he is the first player since Rooney to score more than one goal in his first Champions League match. The belief now is that a star is a born, so Håland’s stock is about to go up.

Of course, Ole Gunnar Solskjaer knows a thing or two about the striker from managing him at Molde.

Håland made the move from Norway to Austria. His next transfer could easily see him join one of Europe’s top five leagues, and we’re sure Solskjaer has some considering to do…

Check out some of the reactions to Håland’s memorable Champions League debut below, with a number of United fans wanting Solskjaer to sign his former striker.

Yep. Looks like Haaland might be a future united player under Ole, start working on your Norwegian…

Haaland is lethal. Ole better bring him in

United gotta sign Haaland, surely Ole can have a word with Mr Woodward about this one! #mufc #ucl