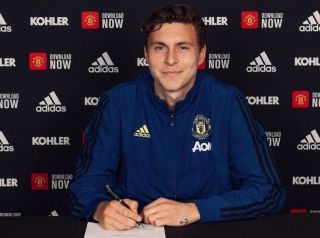 Victor Lindelof has signed a new five-year deal with Manchester United which will keep him at the club until 2024.

Despite being linked with a move to Barcelona over the summer, as reported by The Guardian, Lindelof has decided to commit his long-term future to the Red Devils.

It took the Swede some time to settle at Old Trafford, featuring just 17 times in the Premier League during his first season, but last season he was easily one of the most improved players at the club and warrants this new deal.

Lindelof has featured in all of United’s Premier League games this season and has solidified himself as Harry Maguire’s partner at the back. Academy graduate Axel Tuanzebe is currently seen as third choice, although that may chance when Eric Bailly returns from his knee injury.

United have an option to extend Lindelof’s contract by another year when the five-years are complete, making it a potential six-year deal. He will be 31-years-old by the time that comes around so it’s safe to say his best years will be spent in the red of Manchester.

Speaking after signing his deal, the Sweden international says he is looking to continue his improvement and wants to win trophies.

“Since the day I arrived air United, it has felt like home,” Lindelof told Manchester United’s official website.

“I have grown significantly both as a player and as a person in the last two years and for that I am grateful to everyone at the club for their help and support. I love playing football and my aim now is to help the team to win trophies and repay the fans for their unrivalled support.

“I’m still young and know I can improve further but with the help of the boss and his coaching staff, I believe that only good things are ahead for this great club.”

Lindelof also took to Instagram to thank his agent, Hasan Abim, for everything he’s done for the defender and his family.

Hasan Abim. My agent but most importantly my friend. Thanks for everything you have done for me and my family!

As per usual nowadays, people jump straight to social media to react to breaking news.

Most of the reactions are from fans surprised by the news because nothing was leaked to the press before the announcement, though with Barcelona apparently sniffing around it was important to tie Lindelof down to a long-term deal.

Here’s a list of United fans having their say on Lindelof putting pen to paper over a new deal.

These two staying for another 4 years pic.twitter.com/ac5OuibA5m

The day just got a million times better.

love to see it

This is it! Getting contracts sorted early. A clear change in structure and planning. Good to see.🔴🔴

This is it! Getting contracts sorted early. A clear change in structure and planning. Good to see.🔴🔴