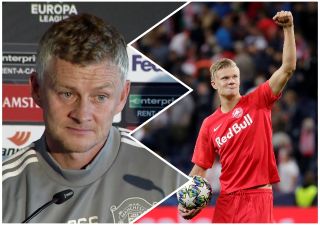 Having played under Ole Gunnar Solskjaer at Molde, where he broke through as a professional footballer, the media were keen to hear from the Manchester United manager.

Solskjaer was asked if Håland can play at a level like United.

“It was nice watching the game last night,” Solskjaer said, as per the Manchester Evening News. “Everyone excited by his development.”

United should be in the market for a goalscorer in January or next summer and if Håland continues to score goals domestically and in Europe, you can be sure we’ll be in the race for his signature.

Solskjaer worked closely with developing Håland’s game but is said to be a Leeds United supporter. His dad not only played for Leeds but Man City too, but let’s not mention Roy Keane if any negotiations take place.

But United also need to get back into the Champions League to attract the best young players in Europe. That goes for Borussia Dortmund’s Jadon Sancho too. Why would he leave the Bundesliga giants, who are already in the Champions League, for a side dropping into the Europa League?

Håland is sure to attract attention from a host of clubs if this level of form continues.