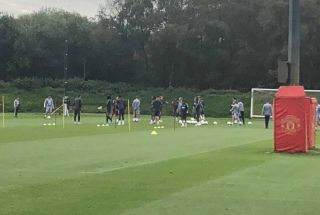 Paul Pogba and Luke Shaw trained away from the group to build on their fitness after being out with injuries the past while.

Ole Gunnar Solskjaer’s men kick off their Group L campaign at home to the Kazakhstan champions at Old Trafford on Thursday evening.

There’s nothing to suggest why James would miss training today, which was open to the media before Solskjaer takes answers from the press.

Daniel James not out there. pic.twitter.com/Z4lhoOoCtp

Anthony Martial was another absent from the session, but Jesse Lingard was involved despite missing Saturday’s win over Leicester City. Diogo Dalot also returned to training after suffering with a hip injury.

A notable mention goes to Charlie Wellens, the 16-year-old son of former midfielder Richie, who was included in the training group at Carrington. He has made five appearances for the U-18s this season and was an unused substitute when the U-23s took on Fulham last week.