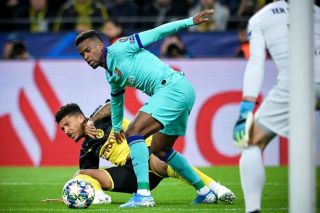 While Jadon Sancho admits he does not know what the future holds, Borussia Dortmund sporting director Michael Zorc claims the England winger is not for sale.

Sancho has reportedly emerged as United’s top transfer target following previous speculation over a move to Old Trafford during the summer, as reported by ESPN, with Leicester City’s James Maddison being another English youngster monitored by Ole Gunnar Solskjaer.

The 19-year-old produced another impressive display as Dortmund drew 0-0 with Barcelona in their Champions League opener on Tuesday.

Asked about his future after the match, Sancho conceded nothing is certain moving forward but his desire to bring success to BVB remains.

“I can’t tell you the future. I just take it game by game. I just wanna give 100% for Borussia Dortmund,” Sancho told Viasport.

“I really want to do well with Dortmund. Obviously, I want to win titles and give everything.”

The former Man City youngster has a bright future in the game and we’re all hoping that’s at Old Trafford rather than the Etihad or elsewhere.

Sancho is now renowned as one of the best talents in Europe — despite leaving the Premier League because he wasn’t getting first team opportunities under Pep Guardiola at City.

Last season when BVB finished runners-up to Bayern Munich in the Bundesliga, Sancho scored 12 goals and supplied 14 assists. This season he already has two goals and four assists.

“It’s crazy. Everything has come so fast,” he told Viasat.

BVB’s hierarchy get the same questions from the media over Sancho’s future. There’s no denying he is a player in demand and United definitely want to sign him if the opportunity arises.

Zorc revealed though United were interested in talks over Sancho, BVB were quick to shut down their interest.

“We didn’t talk to them [United],” the director told Viasport.

“They were asking us for a meeting. Sancho is not for sale.”

If United get into the Champions League next season, I think we stand a very good chance signing Sancho.