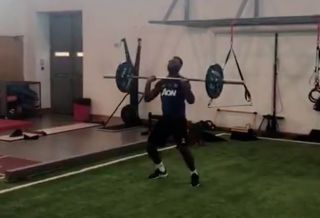 Timothy Fosu-Mensah has been working hard in the gym as he continues to recover from a serious knee injury.

All looks to be going to plan for the 21-year-old, despite sustaining ligament damage towards to end of last season while representing Fulham on loan.

As a result, Fosu-Mensah returned to United to undergo knee surgery and he missed out of the pre-season tour. That was a blow for the young Dutchman, who will be hoping for minutes on the pitch now it looks like he’s almost set to return.

His latest post on Twitter shows the defender back working out in the gym, so Ole Gunnar Solskjaer should soon have another right-back / centre-back to select from in the coming weeks.

Let’s hope Fosu-Mensah can have a positive impact in the dressing room.