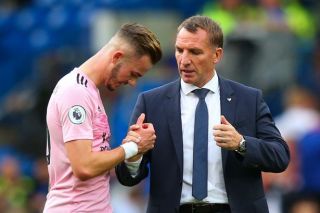 Brendan Rodgers accepts that James Maddison would want to leave Leicester City for a club like Manchester United or Liverpool, the two Premier League big-hitters linked with the Foxes’ star player.

Maddison has quickly become Leicester’s best player since joining the Midlands club in June 2018 from Norwich City for approximately £20m, as per BBC Sport.

Now the question is when will Maddison look to make the next big jump for his career. Rather than rush everything the 22-year-old didn’t push a transfer out of Leicester this summer, but is likely to offered a move next year should be continue to show great form in the Premier League.

The playmaker produced eight goals and nine assists in his 44 appearances for Leicester and earned call-ups to the senior England squad.

However, Maddison has yet to be handed his first cap for the Three Lions, though it would be quite the shock if we were still saying that in a few months’ time.

His performances are catching the attention of many football clubs, with ESPN tipping Ole Gunnar Solskjaer to make a move for the attacking-midfielder in the region of £70m-£80m.

Meanwhile, former Liverpool defender Jamie Carragher has gone on record saying he thinks Maddison could take the Merseyside club to the next level, as quoted by The42.

And Rodgers, who was Liverpool manager himself from June 2012 to October 2015, admits he can understand why a move to Anfield or Old Trafford would appeal to Maddison.

“I’ve been fortunate that I’ve been at Liverpool where I understand the draw of that type of club,” the Leicester City boss said, when asked about rumours concerting Maddison, as quoted by The Express.

“Liverpool and Manchester are two of the biggest clubs by far.

“There’s other great clubs, there’s big clubs, but those two, in terms of worldwide status, are above the other clubs.

“So whenever a player gets an opportunity to go to a club like that, to experience that type of pressure, that expectation — and of course there’ll be a financial side to it as well, let’s be real — that as a package in a short career is maybe something that is top hard to turn down.

“I understand it, I get it.

“What we’re building here is exiting in how we’re trying to progress and with the new training ground and everything else, however, for lots of players, that draw is still there and I understand it.”

Leicester’s unbeaten start to the season ended at the weekend when United beat Rodgers’ men 1-0 at Old Trafford.

Now we can wonder if Maddison will be seeing more of Old Trafford of Anfield next season?