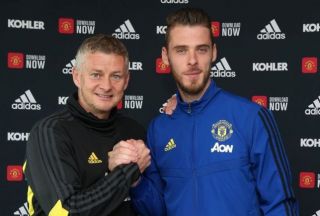 David de Gea reportedly decided to sign a long-term contract at Manchester United after receiving assurances over the club’s determination to win silverware over the coming years.

That’s according to The Times following the news that arrived on Monday with De Gea signing a four-year contract with the option to extend for a further year.

De Gea is now the world’s highest-paid goalkeeper after securing a financial package worth £375,000-per-week.

Manchester United correspondent Paul Hirst claims De Gea signed the contract on the conditionality that United were serious about challenging for major silverware and would invest in the squad accordingly.

If the club promised to do that and don’t stick by their word, De Gea is bound to kick up a tantrum at some stage, but I wouldn’t be naive enough to believe anything will change while the Glazers are in charge…

Moreover, the Spaniard is said to have felt a sense of personal debt to Ole Gunnar Solskjaer after the Norwegian stuck by the 28-year-old last season when he made a series of mistakes.

United have a better chance of winning silverware with De Gea between the posts, but he must get back to his best.