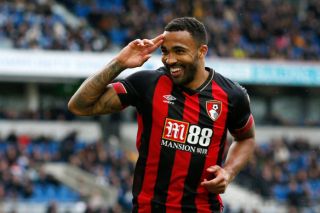 That’s according to ESPN as manager Ole Gunnar Solskjaer looks to build his team around British players.

Wilson has supposedly cropped up on United’s wishlist, with his performances for Bournemouth also impressing Chelsea, as reported by The Guardian in January. That’s when it was alleged that The Cherries decided they would happily sell the striker, but only if Roman Abramovich sanctions the payment of a £75m transfer fee.

He already has three goals in give appearances this season, and United are not currently blessed with goalscorer so could eye-up a move for the England international.

If the Red Devils were to bid for Wilson he is unlikely to come cheaply considering how much they wanted from Chelsea at the beginning of the year.

Wilson is a logical target, not only because we are in dire need of a goalscorer, but he’s home-grown and fits into Solskjaer’s philosophy.

Meanwhile, Marcus Rashford hasn’t fully convinced yet. It could be his place in United’s front three which us most vulnerable!

The other question is would he take the central piece for Anthony Martial?