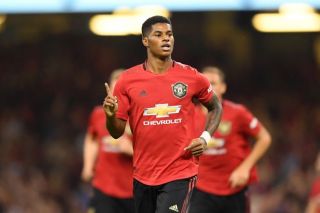 Marcus Rashford, not just the makings of a quality forward, but a world-class guy, too!

Following a tweet from Matt Waymont, explaining how his friend has successful beaten stage 3 cancer, the Manchester United striker reacted with a classy gesture.

Mr. Waymont explains how John, a lifelong United fan, has never been to Old Trafford or England. They’ve raised sufficient funds to get him to the UK but need help sorting match tickets.

Their game of choice is Manchester United vs Brighton.

Rashford was tagged in the tweet along with Jesse Lingard and Paul Pogba, but it was the England striker who responded first and has promised to sort everything, as seen below:

After all — we need a bit of cheering up in life — and Rashford shows footballers are more than a bunch of lads who run around a pitch for 90 minutes every week.