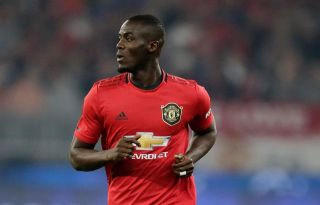 After being originally ruled out of action until December with a serious knee injury, the Ivory Coast international has been making great strides according to a report in the Daily Mail, and he could be back in November.

The 25-year-old has not played a competitive game this term after suffering the injury during pre-season against Tottenham.

It’s always a boost when a player returns ahead of schedule, but United need to make sure the defender is right… Bailly has suffered with enough injuries during his time at Old Trafford and faces an uphill fight for his future at the club.

The report claims Bailly will fly out to Spain this week to see if he’s ready to come off crutches and begin training once again.

However, Bailly will be free to discuss terms with other clubs when the January transfer window opens — with his contract set to expire next summer.

The former Villarreal defender has stiffer competition than before following the arrival of summer signing Harry Maguire. Ole Gunnar Solskjaer has opted to start Maguire alongside Victor Lindelof, while Chris Smalling has been sent out on loan to Serie A outfit AS Roma.

As things stand, Axel Tuanzebe is the third choice centre-back. It will be interesting to see if that changes when Bailly returns fully from injury.