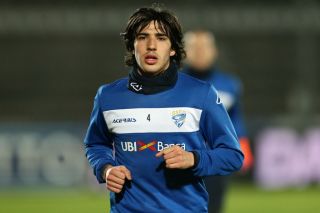 Manchester United are one of several European Clubs with their eye on Brescia midfielder Sandro Tonali.

That’s according to Calciomercato, who claim Ajax and Borussia Dortmund have also registered an interest in the central midfielder.

The deep-lying playmaker burst onto the scene last season in Serie B, and has quickly attracted attention from some of the biggest clubs in the world. However, no offers arrived for Tonali in the summer as it looks like teams are waiting to see how he does in the top flight.

It has been reported that all three clubs, including United, sent scouts to watch Brescia’s 4-3 defeat to Bologna on Sunday. The 19-year-old was substituted for the 10-man hosts after 79 minutes of play.

United should be looking throughout European at a bunch of midfielders throughout the season. That way, Ole Gunnar Solskjaer should be able to ensure he finds the right players next summer to really improve his team.

I don’t know who is to blame for the lack of scouting in recent years, but at first-team level we haven’t been finding any unknown gems in a long time.

There has also been lots of talk about Nemanja Matic’s future at the club, with Solskjaer now preferring Scott McTominay to the Serbia international. So the need for better defenders becomes greater by the day.

The teenager has also been linked with Juventus, as per Bleacher Report, as there’s speculation regarding Chelsea as well.

It’s too early to say United will definitely make a move for Tonali, but as an emerging midfield talent we’re right to keep tabs on the young Italian.