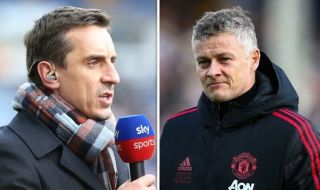 Rice has a terrific breakthrough season last term and is expected to build on that form this time around, with a number of big clubs linked with a future move for the England international.

Rice, of course, is used to having options and that’s likely to be the case again when he decides to call time on his stint at West Ham. He caused a lot of controversy when he turned his back on the Republic of Ireland, whom he represented at youth level for years, to turn out for Gareth Southgate’s Three Lions instead.

READ MORE: ‘Confident we will get this sorted’: Solskjaer positive on Man Utd star’s contract talks as new deal touted

He has been linked several times with United, most recently in a piece by the Manchester Evening News, but Neville discussed the player on Sky Sports’ Monday Night Football show.

In what could be seen as a message to Ole Gunnar Solskjaer, Neville bemoaned the amount mid-table clubs can charge for star players now, and perhaps more faith should be shown in the likes of Scott McTominay.

“I don’t know,” Neville is quoted by the Manchester Evening News.

“I mean you talk about £80, £90m to get him out of West Ham. We’ve seen a bid for (Wilfried) Zaha go to Everton this year for £70m. To get players out of the likes of West Ham now, Crystal Palace, it is not going to be easy. It is going to cost a fortune.

“Would I say yes now at 80m, 90m? I’m not feeling that personally at this moment in time, but I am seeing a really good player who could potentially develop into something fantastic for the next ten years? Yes. I really do think that.

Matic is past his best and we don’t really know how good good McTomainy will become, so most United fans would probably disagree with Neville’s analysis here.

Rice is better than both United players used as examples by the former club captain, and the midfield isn’t as strong as it needs to be if we plan on competing for league titles anytime soon.