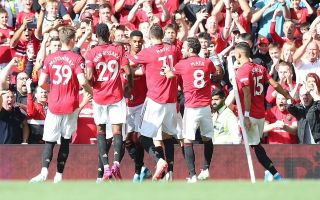 Some Manchester United fans are massively concerned with the side’s ‘boring’ and ‘dreadful’ performance after today’s win vs Leicester.

Marcus Rashford handed the Red Devils the lead just seven minutes into this afternoon’s clash, the England international won a penalty and silenced doubts over his spot-kick abilities with a comfortable conversion.

Take a look at the goal here.

This proved to be the only telling moment in this afternoon’s encounter, the rest of the clash actually saw us on the back foot against the Foxes.

Brendan Rodgers has a wealth of young talent at his disposal, but we are Manchester United and we should be putting away teams like this – not relying on a penalty to come away with three points.

At least fans got a glimpse of talented youngsters Axel Tuanzebe and Tahith Chong this afternoon.

Last summer’s marquee signing Fred also replaced Nemanja Matic and got almost half an hour of game time under his belt.

What do you make of the stats from the match?:

The side’s nervy performance this afternoon has raised serious question marks from fans over the style of play that we are currently adopting, here’s some reaction:

embarrassing boring performance, when will ole stick by his word and playing good, attacking football for once?

Lucky win. Boring game. But 3 pts is what that’s important. We go on.

Wins a win but that was dreadful. Thank you Martin for the 3 points. More

I am just scared for us tho, so no Penalty today & we would have drawn? SMH. We need to start playing like a Top Team for once & win Emphatically. Good win tho, didn’t give us a chance tbh 🙏

Most boring game in my life

Only positive is we looked decent defensively. Apart from that, performance was dreadful

Struggling to score. Nothing to be proud of . Get down your high horse

What we learned from this game:
-Fred>Matic
-Rashford is a wing
-De Gea remembered how to play
-Maguire is good
-McTominay is a player
-Dan James is going to be really good
-Pereira is better at #10 than wing
-We need Martial at #9
-Chong might be a player

Useless style of play. The midfield was just a grave yard. Nothing to show, no freestyle and good display in the midfield. That midfield has nothing to offer this season. We have not even played the big guns.

Is some of the reaction from fans too harsh or does Solskjaer need to make some big changes to our style of play?

The Red Devils have a hectic schedule coming up, starting with a lengthy trip to start our Europa League campaign against Astana.

Two cup clashes will perhaps give the chance for fans to see some of the club’s talented youngsters being handed a starting role.

However, the busy schedule reinforces the fact that Solskjaer is running out of time to iron out some of the side’s weaknesses.