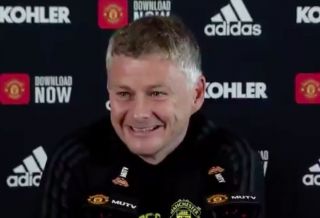 Ole Gunnar Solskjaer was in good spirits in this morning’s press conference ahead of Manchester United’s tough home fixture against Leicester City on Saturday.

The United boss joked that he would take Daniel James off early on to protect his own record at the club.

James has the chance to score a goal in each of his first three games at Old Trafford, after netting against Crystal Palace and Chelsea.

This feat was last achieved by Solskjaer himself, who went on to have an illustrious career at the club.

Meanwhile, United’s task of beating Leicester has been made even more difficult after learning key stars Paul Pogba, Anthony Martial and Luke Shaw will all be ruled out because of injury.

Jesse Lingard and Aaron Wan-Bissaka are also doubts after withdrawing from the England squad during the international break.

But in James, Solskjaer has a winger at the top of his game, and he is likely to prove United’s biggest threat again against unbeaten Leicester at Old Trafford.