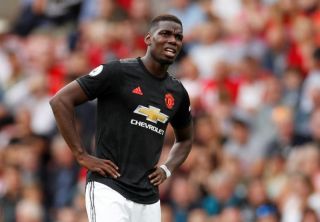 Manchester United have been handed a huge injury blow ahead of tomorrow’s clash against Leicester City.

Manager Ole Gunnar Solskjaer has confirmed that key players Paul Pogba, Anthony Martial and Luke Shaw are all ruled out of action against Brendan Rodgers’ side.

There was an expectation Shaw would miss the game after his hamstring injury sustained in the home defeat to Crystal Palace, but there was a hope amongst fans that Martial and Pogba could return.

However, Solskjaer confirmed the French duo are not fit enough to play any part at Old Trafford on Saturday.

“Well we hope more can be ready for West Ham next week and Paul and Anthony are in that category, I think they’ll be ready for then and can’t say more than that really,” Solskjaer said as quoted by Manchester Evening News.

The Reds were already facing a tough test against third-place Leicester, but surely the Foxes are now favourites for the game with United missing two of their most influential stars in Martial and Pogba.

Martial’s absence may give Mason Greenwood to make his first competitive start of the season at Old Trafford.

🗣 – "The treatment room has been busy and it still is!"