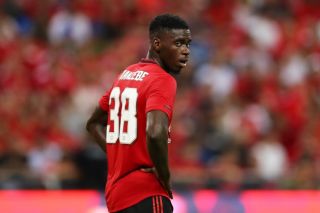 Ole Gunnar Solskjaer has been dealt some huge injury blows for Saturday’s clash with Leicester City at Old Trafford.

The United boss is without key men Paul Pogba and Anthony Martial who have both failed to recover in time from injuries sustained before the international break.

Luke Shaw is also still out of action following the hamstring injury sustained in the defeat to Crystal Palace.

With Jesse Lingard and Aaron Wan-Bissaka also doubts for the game, Solskjaer is limited in options to select against the unbeaten Leicester side.

Solskjaer’s injury crisis mean starts will be be handed to players with little first-team game time this season.

Ashley Young is likely to start at left-back in place of Luke Shaw, and Axel Tuanzebe can play at right-back so he may take Aaron Wan-Bissaka’s place if he is ruled out with his back problem.

Alternatively, Marcos Rojo may be handed a rare start at left-back after playing minutes for Argentina during the international break, with Young filling in at right-back.

Pogba’s absence worrying means United could have even less creativity in midfield. Expect mainstay Scott McTominay to retain his place, and Solskjaer has suggested Juan Mata and Nemanja Matic will need to step up so the pair could start alongside McTominay in midfield.

Mata will have the responsibility on his shoulders to create opportunities for United’s attackers, against a Leicester side who have not conceded more than one goal in a league game this season.

Daniel James should retain his place on the left-wing after a run of excellent performances this season. The winger continued his fine form in the international break, scoring Wales’ winner against Belarus.

Meanwhile, Martial’s injury means Marcus Rashford could start again up front, despite being wasteful from the position in the draw against Southampton.

Mason Greenwood could start centrally, but may take the spot on the right-wing if Jesse Lingard doesn’t recover from his illness.

We hope the 17-year-old gets his chance to shine against Leicester, but Solskjaer could instead choose to select Andreas Pereira in the front three.

See a potential 4-3-3 line-up Solskjaer could select in full below: 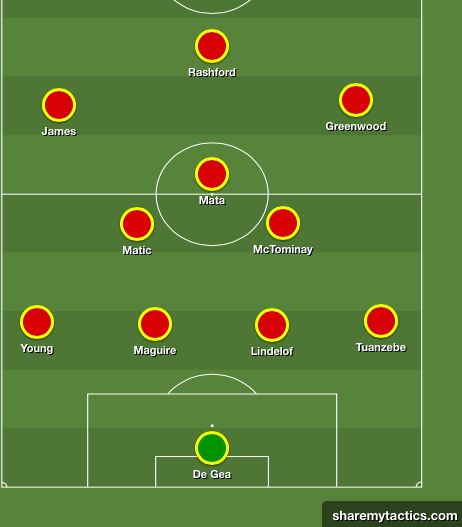