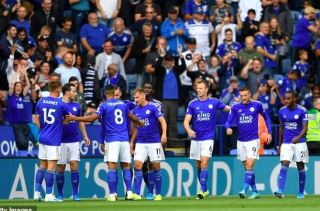 Manchester United’s game against Leicester at Old Trafford could be Ole Gunnar Solskjaer’s biggest test yet this season.

The Reds are missing key stars Paul Pogba and Anthony Martial for the clash, with Aaron Wan-Bissaka and Jesse Lingard further injury doubts.

Leicester, meanwhile, have made an unbeaten start under Brendan Rodgers and will be high on confidence after consecutive wins against Sheffield United and Bournemouth.

We enlisted the help of Leicester Mercury writer Jamie Kemble to give us the lowdown on the Foxes’ ambitions and key players to watch out for in tomorrow’s game.

How high up do you think Leicester go this season? Could they realistically finish ahead of United?

Top six is a very realistic aim of Leicester’s this season. Between the talent in their squad and the tactical versatility brought to the table by Brendan Rodgers, they could well get into that top six. There’s no better time to do it, either. Both Chelsea and Manchester United have hugely experienced managers in their first year in charge (full year in the case of Solskjaer), and that offers an opportunity.

As for the Foxes finishing above United – it’s a very real possibility. I witnessed first-hand how poor a manager Solskjaer is at Cardiff, both in terms of man-management and tactical management. Nothing I’ve seen from him at United has changed my mind, and as things stand, I think it’ll be a difficult season for the Red Devils.

NEXT:Combined XI: How many Leicester City stars make it into Man Utd’s first-team?

Many United fans rue not signing Tielemans this summer. How has he settled in and what role do you expect him to play at Old Trafford on Saturday?

He has actually started pretty slowly, or at least compared to the standards he set at the back-end of last season. Though, he looked back to his best last time out, assisting and scoring in the win over Bournemouth. Youri is an excellent player and he has a great footballing brain. He’s one of those players who has already decided on his next pass, which is so often forward. He will play his usual role in an advance midfield position on Saturday.

Just how good is James Maddison and do you expect him to eventually move on next summer?

The hype is real. Maddison is a real talent and anyone who has seen him play will know that. He creates quality chances with his endless stream of through balls, and he is also very good on the ball with a nice turn of pace and quick feet. There will come a time when he does move on, but that’s not necessarily next summer. Leicester never have to sell a player, they’re in a fantastic place financially. If they qualify for Europe, they’re not going to lose one of their best players, and unless perhaps City or Liverpoop come calling, Maddison isn’t going to want to leave. United are a great, huge club, but you’d have to say, they aren’t the attractive prospect they once were for players, and they especially won’t be for Maddison should Leicester finish above them.

How are Leicester coping with the loss of Harry Maguire?

Comfortably. Caglar Soyuncu has enjoyed an excellent start to the season. He’s added composure to his defensive game, and he’s ultra-confident on the ball. His performances have even seen him outperform Maguire in terms of stats – not that you can read too much into that after four games. He has stepped up, playing alongside Jonny Evans, who has been terrific as ever. So far this season, the loss of Maguire hasn’t had any impact at all, or at least it’s felt that way.

Who will be the main threat for United to watch out for?

Take your pick, though it really depends what system Rodgers goes for. But on the face of it, United will need to limit the productivity of Tielemans and Maddison – dealing with both can be very difficult. Jamie Vardy speaks for himself – he is always going to be a threat, and watch out for the impressive Harvey Barnes out wide.