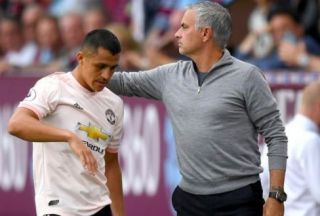 Former Manchester United boss Jose Mourinho says Alexis Sanchez was a ‘sad man’ during his reign at Old Trafford, which is why he failed to perform.

Sanchez has managed just five goals in 45 appearances for United since joining in a swap deal involving Henrikh Mkhitaryan in January 2018 – as per BBC Sport.

The 30-year-old got his move to Inter Milan this summer in a season-long loan deal, as per Sky Sports.  It’s believed there’s no option to buy at the end of the season as the Reds are confident they will be able to attract more interest in Sanchez if he has a successful season in Italy.

NEXT:Combined XI: How many Leicester players make it into Man Utd’s first-team?

Mourinho was in charge when Sanchez was brought to the club, and has tried to explain the player’s dramatic demise in form.

In a brilliant wide ranging interview with Sam Wallace for the Telegraph, the Portuguese manager said:

“Sanchez… I felt him not a happy man. And I think in every job you have when you are not happy it is not so easy to perform at every level. And maybe I am wrong.

“So probably in Italy he will recover this. I hope he can. I always wish well to every player.”

Sanchez’s spiralling career is one of the biggest enigmas in football – it could be argued he was world class before joining United.

We’ve seen a shadow of the player recognised as one of the most dangerous attackers in the world when at Arsenal. The Chilean international looked completely void of any self-confidence when on the pitch for the Reds.

It will be interesting to see if Sanchez can get his career back on track under Antonio Conte this season in the Serie A.