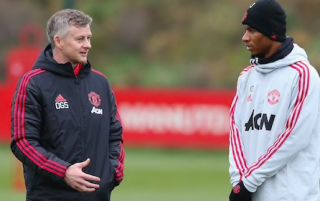 Marcus Rashford has backed manager Ole Gunnar Solskjaer, suggesting he has a long-term plan to bring success back to Old Trafford.

The Reds have made a faulty start to the season under the Norwegian, picking up just five points in their opening four league games.

Rashford in particular has come under some heavy criticism for his ordinary performances in recent weeks, but believes Solskjaer is taking United in the right direction.

“Right now, everyone is confident in the manager for one,” he told Football Focus.

“We might not be doing what he is telling us to perfection yet, but the initial response to his tactics, his training has been phenomenal.

It’s encouraging to see Solskjaer is focusing on planning for the future at the club, but results come first and foremost and the Reds need to start picking up wins to get back on track this season.

An identity is clearly being implemented on the pitch, but not enough good opportunites are being made from United’s creative players to put away opposition teams.

Rashford may start from an unfamiliar wide-right position at Old Trafford on Saturday as the Reds take on third-placed Leicester City.