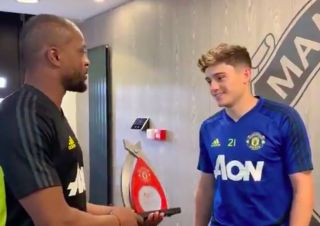 Manchester United great Patrice Evra’s passionate speech whilst presenting Daniel James with the August player of the month award is not something to be missed out on.

The Frenchman is currently back at the club’s Carrington training ground to complete his coaching badges.

Evra gave an inspiring speech to James, and it’s clear he still has deep affection for the club he won five Premier league titles with under Sir Alex Ferguson.

New signing Daniel James was fas a fully deserving recipient of the player of the month award for August.

The winger has looked the most dangerous attacking player for the Reds so far this season, scoring three goals in four games.

James continued his excellent form into the international break with Wales. His stunning curled effort proved to be the decisive moment in the victory over Belarus and he was also the standout player in the crucial Euro 2020 qualifying game against Azerbaijan.

Ole Gunnar Solskjaer should continue  to select the youngster in his favoured left-wing position against Leicester at Old Trafford on Saturday.

Straight from the heart ♥️