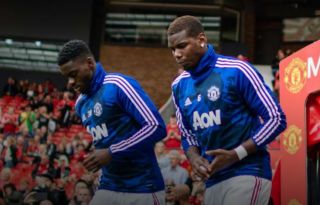 Manchester United host Leicester City this weekend and Brendan Rodgers’ side go into the game unbeaten this season, with two draws and three wins in all competitions.

Unfortunately for Ole Gunnar Solskjaer, who is now tasked with getting his players back on track after a run of disappointing results, he has a number of injuries to deal with ahead of the clash.

Leicester are third in the Premier League with 8 points from 4 matches, whereas United are with with five points on the board.

The Red Devils haven’t won in their last three outings, following draws against Wolves and Southampton, plus a defeat to Crystal Palace.

We’ve just been dealt a blow with three regular started uncertain to feature.

The boss could be without three regular starters after Aaron Wan-Bissaka, Paul Pogba and Jesse Lingard were all forced to return early from international duty with their respective nations in the break.

You’d imagine Lingard will be back to face the Foxes since he had an illness during the international break. That said, the seriousness of that illness was never revealed…

Wan-Bissaka is dealing with a back problem and could miss the weekend’s game, and if that’s the case Axel Tuanzebe should be handed his first minutes of the season.

Pogba, on the other hand, has been nursing an ankle injury.

They haven’t given us an update yet on Anthony Martial or Luke Shaw.

After picking up an injury against Palace, Martial missed the draw away at Southampton just before the international break. We all have our fingers crossed that he returns on Saturday.

As for Shaw, it would be nice to see him back to take the left-back slot away from Ashley Young.