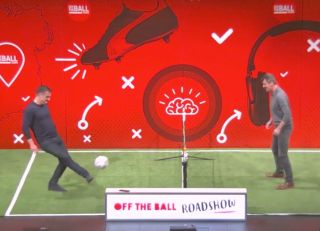 There’s gel on the ball.

Well, at least that’s what Roy Keane had to say as the opening point when to former team-mate Gary Neville.

Everyone has come across the quotes from Keane last week, from an event hosted by the popular NewsTalk radio show Off The Ball.

He reignited his war of words with Sir Alex Ferguson and went in hard on former Republic of Ireland international Jonathan Walters.

“And Ferguson came out afterwards: ‘I always did what was best for United.’ Nonsense! His son played for the club and won a league medal…”

But forget what was said for a moment…

Off The Ball managed to get the former Manchester United duo to take on one another in a Foot Tennis match.

We won’t spoil it by telling you who won… but it was a close encounter with some funny moments.