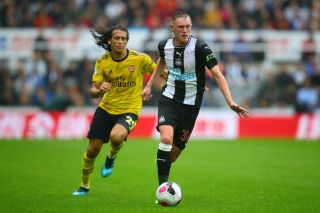 Newcastle midfielder Sean Longstaff has spoken out about the speculation linking him to Manchester United in the summer.

The 21-year-old has admitted that it was not hard to be distracted during the summer when links to United ended up in the newspapers.

Longstaff was considered by manager Ole Gunnar Solskjaer, but the feeling you get since then is that Newcastle asked for too much and United weren’t willing to overspend on a player with so little Premier League experience.

As stated by The Express, the Red Devils were thought to be preparing a bid of £25m for Longstaff but the Magpies wanted close to double that instead.

United ended up signing three other players instead, such as Aaron Wan-Bissaka, Daniel James and Harry Maguire. All three have started the season well but United should have signed a midfielder and another attacking player as well…

But Longstaff has continued to impress this season. He told the official Newcastle website: “You can sometimes get distracted by the outside noise and maybe a little bit in the summer I was a bit.

“It’s hard not to. Whenever you go anywhere, you see your face on the front of a newspaper and you turn the telly on, people are talking about you.

“The expectation is half what I’ve done and it’s probably a good thing.

“It does just go to show I did impress people when I got my chance last year.

“So for me it’s about not listening to them and sticking to what I do.”

Longstaff received advise from Newcastle team-mate Matt Ritchie on his situation over the summer, stating that he was helped kept grounded by the former Bournemouth midfielder.

“I speak to Matty Ritchie a lot, he’s someone I lean on in the squad,” Longstaff continued.

“He tends to keep us grounded and he’s always there with good bits of advice.”

Newcastle are currently 14th in the league. The Toon’s only win this season under Steve Bruce came as a shock against Tottenham Hotspur.