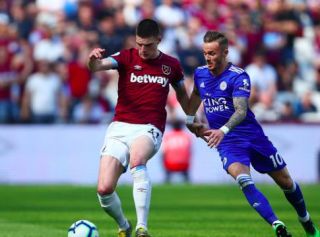 Manager Ole Gunnar Solskjaer has reportedly identified a host of young, home-grown talent to target in the coming transfer windows as part of his Manchester United rebuild.

The Reds have focused on a recruitment strategy of emerging British talents so far under the Norwegian, bringing in Daniel James, Aaron Wan-Bissaka and Harry Maguire.

Each of United’s signings have settled in well at Old Trafford, and it’s believed Solskjaer is keen to continue strengthening the British core of the squad.

Evening Standard reporter James Robson has listed four players all of interest to Solskjaer, in a long-term plan to bring back success to the club.

The Evening Standard reported today that the Reds are weighing up a move for the attacking midfielder in January. Maddison would be a fantastic addition in a position Solskjaer is currently lacking in.

In his first season in the Premier League, he scored seven goals and contributed seven assists. This is hardly comparable to Jesse Lingard who has had no goal contributions for United in the last eight months, despite operating in a similar role.

Maddison has made another excellent start to the campaign for Leicester, earning himself a call-up to the England squad by Gareth Southgate. He thrives finding space in between opposition midfield and defence and has an eye for a through ball which have been so effective for the likes of Jamie Vardy at Leicester. Maddison is also not afraid to shoot from outside the box, and is always threatening from dead ball situations.

Borussia Dortmund Sporting director Micheal Zorc has confirmed talks have been held between the two clubs for the 19-year-old.

“But, according to what I know, the consultant told the club that no matter how much money they offer, we won’t let him go this summer.

Sancho is undoubtedly one of the most talented young players across Europe and will be highly coveted if made available this summer. He scored his first two international goals in the Euro 2020 qualifier against Kosovo this week, and is already looking to establish himself in a deadly England trio with Raheem Sterling and Harry Kane. The winger has been electric at Dortmund since joining from Manchester City in 2017; constantly looking dangerous from the right-wing position, a role United don’t currently have a specialist in.

The transfer of Sancho would be a huge statement, but Solskjaer would need the added incentive of qualifying Champions League football to attract the youngster, a feat that seems improbable even at this early stage of the season.

Rice is another of Gareth Southgate’s promising youngsters in the England squad, and was West Ham’s star man in midfield last season. United are extremely short in midfield options after neither Ander Herrera or Marouane Fellaini were replaced this summer.  With Nemanja Matic’s form dwindling, Rice could be the anchorman Solskjaer needs in his his midfield in the coming years.

However, the £90m value quoted by former Premier League striker Noel Whelan is excessive; surely there would be cheaper options available if that’s the price West Ham demand for the 20-year-old.

The Newcastle midfielder Robson has claimed Solskjaer is looking at to add to his midfield. Longstaff impressed in several games under Rafa Benitez last season, and the Norwegian has clearly seen something he likes in the youngster. Longstaff still seems some way off being selected for Southgate’s England squad, and must get a large run of games in the Premier League before a huge fee is splashed out.

Sky Sports reported that United wanted to complete a deal for Longstaff this summer to bolster their midfield options, but were put off after being quoted a ridiculous £50m fee.