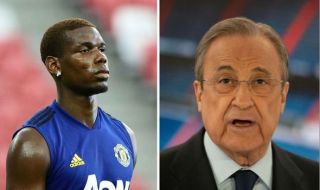 Paul Pogba remained at Manchester United this summer despite constant speculation linking him to Real Madrid and Juventus.

And yesterday it was reported by Italian outlet Calciomercato that Paris Saint-Germain were really close to landing the French midfielder. There was apparently an agreement in place between all parties but Neymar’s failed return to Barcelona is said to be the reason Pogba didn’t leave Old Trafford for Paris.

True or not, PSG being that close to signing Pogba this past summer wasn’t exactly public knowledge. Not as public as Real Madrid’s admiration for the 26-year-old.

Los Blancos, as club president Florentino Perez would admit, want to win again after a disappointing season last term. They will continue to make big signings to ensure that doesn’t happen again and there was always going to be a dry period following Cristiano Ronaldo’s departure.

Eden Hazard was the big signing this summer but they will be looking to add Pogba to their squad in the upcoming transfer windows, according to Perez himself.

Perez is quoted by Gianluca Di Marzio as saying: “We tried to bring Lewandowski to Madrid more than once but it was not possible. Same thing happened with Pogba, our first choice, but Manchester United did not want to sell it to us.”