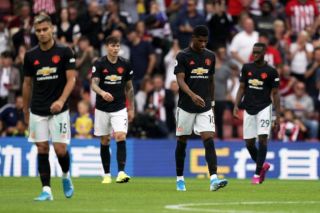 The international break is over (finally!) and we’re now wondering if Manchester United can get back to winning ways against an unbeaten Leicester City in the Premier League this weekend?

With just five points from four matches — United’s lowest tally since the 1992/93 season — there aren’t many of us sure of getting all three points from what should be considered a winnable game at Old Trafford.

Leicester are looking for their first win at Old Trafford for the first time since January 1998, which would inflict even more pain on Ole Gunnar Solskjaer and his men.

Despite our recent form, the Red Devils are odds on favourites at 4/5 to win the game whereas the Foxes can be got at 10/3 to claim all three points. A draw is 13/5.

Solskjaer needs his side to start taking their chances to start winning games again. Certain injuries plague their chances on Saturday, but United must put in all their effort to oust Leicester and climb up the Premier League table.

Thankfully, Anthony Martial is tipped to be back against the Foxes. Jesse Lingard, Paul Pogba and Aaron Wan-Bissaka all pulled out of international duty last week, while Luke Shaw may be still be nursing his hamstring injury.

United’s only other known injury concerns are Diogo Dalot, Eric Bailly and Timothy Fosu-Mensah, who are yet to play this season.

We sneaked a win against Leicester the last time they came to Old Trafford, and I’d take the same again this time around. United are desperate for a win.

Rodgers will be without three players fort the clash. Wes Morgan is out with a back injury and is reported to be doubtful, while Matthew James and Daniel Amartey are both long-term absentees.

Leicester’s Marc Albrighton is confident of a win at Old Trafford, he told Leicester City’s official website: “There’s no reason why we can’t do it. We’re going there full of confidence and we’re playing with freedom. We’ve got the ability, in my opinion. I feel like we can hold our own against them, and probably more than that, go on and beat them.”