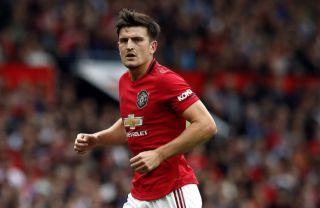 Former defender Jonny Evans expects that Harry Maguire will turn out to be a bargain for Manchester United.

The Reds signed the English international for £80m this summer, a word-record transfer fee for a defender. The price tag raised eyebrows among football fans, including lots of United fans dubious as to whether he is worth such a large fee.

But United desperately needed to sign an established centre-back to bolster their defence this summer, and Maguire was clearly Ole Gunnar Solskjaer’s prime target.

Jonny Evans, who played alongside Maguire last season at Leicester, thinks he is the perfect addition for the Reds.

“I think Harry will be at United for eight, nine or 10 years,” he told the Mirror.

“When it comes to that point, I think people will look back at the fee and say it was a bargain.

“I’ve been really impressed with Harry. I think he’ll go on to be a real success at United and he could go on to be their captain – there’s no doubt about that.

“I only spent a season playing with him, but it felt like we formed a good relationship, on and off the pitch.

“He’s a fantastic player and he suits everything United are looking for.

“Not just in his playing style, but how he behaves off the pitch and the personality he can bring.

“He likes to build games out from the back, start attacks and show his personality on the ball.”

It’s encouraging to hear the Northern Irishman speak in such glowing terms of his former teammate, but Maguire has a long way to go to prove his worth.

The 26-year-old has settled in well at Old Trafford however, and has added a different dimension to United’s game under Solskjaer this season though his willingness to bring the ball out from the defence and look to start attacks.

We hope that Maguire can strike a successful central defensive partnership with Victor Lindelof this season.

He will go head to head with Evans on Saturday, as United face third-place Leicester at Old Trafford.