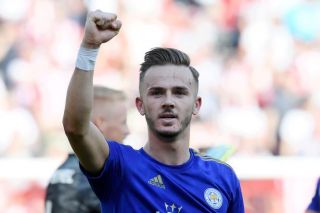 James Maddison has been in great form for Leicester City and it is no surprise that Manchester United are monitoring the playmaker as a potential target for a future transfer window.

Well, that’s if you believe the Manchester Evening News, who ran a story this morning on the club being interested in the former Norwich midfielder.

The local paper for Mancunians claims interest in Maddison emerged in June, which will only has intensified following strong start to the season, tallying two assists in Leicester’s unbeaten start.

United host the Foxes this weekend when Ole Gunnar Solskjaer will be looking for his players to get back to winning ways after going winless in their last three outings.

The MEN understands Maddison was happy to stay at the King Power Stadium for at least another season rather than push for a move. Leicester weren’t going to sell Harry Maguire and their next best thing to the same club in the same summer anyway.

Solskjaer has been on the lookout for young British talent — preferably with Premier League experience — since he took over in a permanent position, so it would make perfect sense for the Red Devils to go all out for Maddison rather than, say, Tottenham’s Christian Eriksen, who is older and edging towards his latter years as a professional footballer.