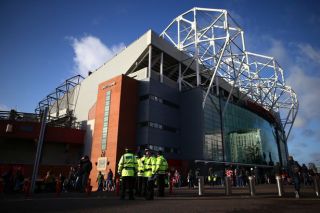 Let me take you back to October 11 2010. What’s significant about that date? Well that day Manchester United let slip a two-goal lead at Old Trafford (including a rare error from Edwin van der Sar) to draw 2-2 with West Bromwich Albion. It was to be the only points United would drop at home that season. They claimed 53 of a possible 55 points at home on the way to the league title. That’s almost the definition of a fortress, many an enemy tried to storm the keep, all but one was swept aside/ Sadly things are much different now as in recent years the likes of Newcastle, Southampton, West Brom again and, most recently, Crystal Palace have all stormed Old Trafford and looted the spoils, in this case, the three points. So just how has Old Trafford turned from a place where opponents dared to tread, to one where they rampage freely?

It seems obvious to say but one very simple reason is the departure of Sir Alex Ferguson. The boss had and still has an aura about him. You knew when you were up against Ferguson’s United that they weren’t beaten until the final whistle had blown. This created an environment where United felt they could overcome any obstacle and opponents simply wilted under the pressure. With Fergie gone, the aura went with him and none of his successors, including Jose Mourinho, who once went 10 years without losing a game at home, could get it back. Even Ole, who is channelling what the boss taught him, has failed to arrest the slide, having lost to Crystal Palace and Cardiff in two of his last three at home. Let’s hope he can sort it out.

The Players have to accept some responsibility for this. In the past, we have seen the likes of Eric Cantona, Roy Keane, Cristiano Ronaldo and Wayne Rooney join United and see it as the place they were meant to be. Old Trafford brought out the best in them and that transmitted to their teammates, they raised the level of everyone around them. Too many of the present group lack that same mentality. In the last four years, I have lost count of how many times United ended up conceding twice within five minutes. The mental toughness was simply not there. Fall behind and United crumbled, fail to score more than one and they dropped deep, desperate to protect what they had. This change in mentality doesn’t take long to transmit to opponents. Suddenly United are vulnerable and teams believe they can get a result. In the past a win at Old Trafford was a rarity, now it seems everyone thinks they can win there (and most of them are right)

One major recent development has been the increase in Matchday Hospitality (VIP) tickets and what many long-time Old Trafford attendees would call ‘day trippers.’ These two things have helped combine to make the Old Trafford atmosphere far less intimidating. Those there for hospitality are more likely to interested in the food and drink and trying to woo (does best Ric Flair impression) clients than to watch the match and get involved whilst the ‘day trippers’, for the most part, come to see the ground and say they been. Most, though not all rarely get involved in the singing. It also seems that nowadays, aside from a few hardcore fans in what is known as J Stand (plus a few others) it takes a big game, or United to be losing to get the fans to create an atmosphere. Again this hardly creates an intimidating environment for visiting teams. One major overlooked, but important fact is the positioning of the away supporters. Despite several attempts to move them permanently, away supporters usually sit in the South East quadrant, just above the disabled supporters’ section. This matters because that part of the ground is the most acoustically sound. This means their noise travels much easier, despite the lower numbers and coupled with the lack of noise from much of the home crowd, means the away fans can often seem louder. A lot of the best atmospheres of recent years have come when the club experimented by moving J-Stand to that section.

Yes, really. Media portrayal and perception plays a much bigger part than people realise. Under Sir Alex, United were seen as this relentless juggernaut and that helped create the aura talked about earlier. Now we are portrayed as perpetually in crisis, a team in transition, the weakest United team in years, with our rivals, City and Liverpool getting the unstoppable juggernaut treatment. Whether consciously or unconsciously this message slowly seeps into the psyche and creates the impression United are there to be beaten (an impression we don’t help ourselves with at times) whilst teams go to City or Liverpool like they used to come to United, thinking they were beaten before they even started. Realistically only United themselves can change this but media portrayal has a huge impact.

So, fortress Old Trafford is figuratively and at times literally (no real money has been spent on the stadium in 15 years), crumbling. It could be a long road back to rebuilding it.