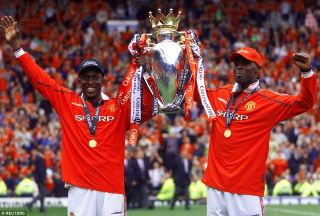 Manchester United legend Andy Cole has warned supporters it will be another few years at least before they get to see their club challenge Manchester City and Liverpool for the Premier League title.

Watching City and Liverpool at the top of the English football ladder doesn’t make for easy viewing, but we’ve had our many days in the sunshine and we’ll just have to sit tight and continue supporting those who wear the red of United.

The Red Devils have not won the title since Sir Alex Ferguson’s last season in 2013.

Under Ole Gunnar Solskjaer, who came in as caretaker manager last December, United finished in sixth after an abysmal start and finish to the campaign. The former resulted in the sacking of José Mourinho.

Cole believes City and Liverpool are creating a gap on the teams below them similar to how United sides he played in did.

“We’ve just got to keep improving, keep bringing in better players and just try and improve season by season, because the two teams at the top — Liverpool and Manchester City — they’re pulling away from everyone.

“I was in a team at Manchester United where we were doing exactly the same thing and in the end, everyone else closed the gap.

“It’s a case of just keep preserving, keep improving season by season and closing the gap.”

Cole’s former team-mate at United, Roy Keane, has recently reignited a feud with his old boss Sir Alex Ferguson, but the former England striker hopes the pair can one day put their differences aside.

“It’s disappointing but I’m just hoping that both of them can address the situation and work it out because I’ve hot a lot of time for the pair of them,” he added.

“I spoke to Roy the other day and I’ve always had a great relationship with Sir Alex, so fingers crossed they will be able to sort it out.”

It’s unlikely that Keane and Ferguson will ever see eye-to-eye again, but their relationship is certainly something everyone connected with Manchester United wants fixed.