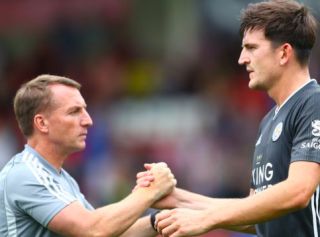 Leicester City manager Brendan Rodgers has spoken in glowing terms about Harry Maguire ahead of Saturday’s reunion at Old Trafford.

The Reds will face the third-placed Foxes in what could prove to be the toughest game so far this season. Leicester are high on confidence on the back of two consecutive wins, whilst United need to get back to winning ways after their worst start to a league season since 1992-1993.

Maguire left Leicester for Man Utd in a world record transfer for a defender this summer, but Rodgers does not begrudge the England international over the move.

“I text Harry wishing him all the best when he was playing with England,” he said as quoted by Manchester Evening News.

“I said before and I repeat, he was a remarkable guy, a fantastic player and for me his behaviour here (at Leicester, during the transfer saga) typified him as a man, even though it was difficult for him.

“I’ll always have respect for him. He’s a good guy and as you can see he’s gone in there and made them better.”

Leicester are so far coping well with the loss of star man Maguire this season with Çağlar Söyüncü proving to be a dominant force in defence.

Ole Gunnar Solskjaer’s men have a tough game on their hands on Saturday, and Maguire will be desperate to keep out the likes of Jamie Vardy and James Maddison in Leicester’s attack.

It’s crucial that the Reds get back to winning ways to push back up the league, but the consensus among many is that Leicester are the surprise favourites because of their fantastic early-season form and class in midfield.