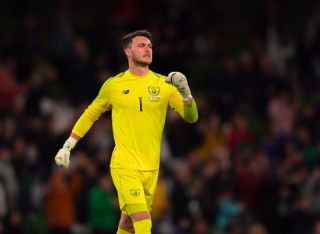 Manchester United goalkeeper Kieran O’Hara made his first international appearance for the Republic of Ireland last night, in a friendly victory over Bulgaria.

Mick McCarthy brought the 23-year-old on in the final 15 minutes in place of Bournemouth ‘keeper Mark Travis.

Ireland ran out 3-1 winners with a second-team side, and had already conceded before O’Hara entered the fray.

O’Hara has been rewarded for establishing himself as first choice on loan at Burton Albion, after a successful spell last season at League 2 side Macclesfield Town.

In reality, it’s going to be extremely difficult for O’Hara to break into the first-team at Old Trafford, given he is behind five goalkeepers, including talented youngster Dean Henderson at Sheffield United in the pecking order.

However, it’s a fantastic achievement for O’Hara to be given his first international call-up and we wish him the best of luck this season at Burton Albion.

A proud night for me and my family making my full international debut in a great win at the Aviva. Bursting with pride 🇮🇪🌎🙏🏼 @FAIreland pic.twitter.com/Ypw8I510Pn