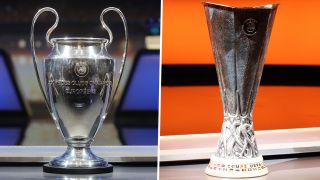 UEFA’s latest club coefficients are out with European football set to get underway later this month.

Manchester United have been ranked in the top ten ahead of the new campaign, despite failing to qualify for the Champions League and having to settle for the second-rate Europa League.

These rankings determine a club’s seeding in draws and the revenue distribution based on results in European competition. They are formed of match points and bonus points collected over the past five years.

United have jumped from 18th to tenth following their performance in the competition last season as they knocked out Paris Saint-Germain before losing out to Barcelona.

Rivals Liverpool are ranked eight despite their Champions League victory, while Real Madrid top the standings with Atletico Madrid and Barcelona behind them. Obviously winning the Champions League three years in a row has some influence over that.

However, Chelsea dropped two places to 12th even though they won the Europa League outright last season. That’s mostly because of Chelsea’s shocking Premier League campaigns in 2015/16, which ended with them finishing tenth, left them without European competition at all for the 2016/17 campaign.

That means the London side achieved zero points for that campaign, while everyone else picked up points.

The Red Devils were out of European competition during the 2014/15 campaign, which meant they had a zero on their total during last year’s coefficient rankings, that has now gone as 2014/15 is not part of the last five seasons.