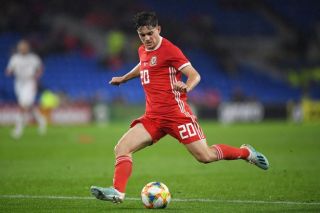 Ole Gunnar Solskjaer must continue with Daniel James starting on the left-wing against Leicester City, even if Anthony Martial returns from injury.

The winger’s piece of individual brilliance proved the difference against Belarus, as he cut inside from the left and curled an unstoppable effort into the far corner.

Although James started the first three games of the season from the right, Solskjaer has to continue selecting him in his best position, after his excellent performance in the draw against Southampton.

Martial was ruled out with injury at St Mary’s which gave James the chance to shine in his natural position, cutting in and causing defenders real problems from the left, including his stunning effort to give the Reds the lead.

Marcus Rashford, meanwhile, has been in indifferent form in the last couple of games and never looked comfortable in a central striker role against Southampton, where he was again wasteful.

If Martial does return from his knock, then he should retain the striker role he scored goals in the opening two Premier League games in against Chelsea and Wolves.

The Frenchman is far more confident in front of goal than Rashford at the moment, and his inclusion will leave Solskjaer a dilemma over what to do with the English international.

Solskjaer remains a huge fan of Rashford, and we expect him to start against the Foxes at Old Trafford on Saturday. However, with James currently firing from the left, high on confidence after winning the August player of the month award, Rashford may have to be shoehorned into the team from the right if he is to start.

The Norwegian has so far played the 21-year-old in an inside-left position when Martial has been fit, but James has been United’s most dangerous player this season and it would be foolish to swap him from his preferred wing.

Rashford could still be effective from the right, a position where Solskjaer does not have a specialist. The forward is often more potent with space to run into and driving at defences, which he will get more opportunities to do, albeit against a tough Leicester side where he will be up against the solid Ben Chilwell.

But Solskjaer can not ignore James’ form on the left-wing and he has to retain this position on Saturday, regardless of whether Martial returns from injury.

See James’ winner for Wales against Belarus below: