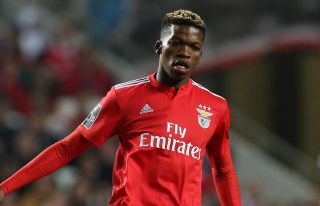 Reports emerged this week that Manchester United scouted Benfica youngster Florentino Luiś in a game against Braga. It was suggested at the time that the Red Devils were ready to compete with rivals Manchester City for his signature.

Portuguese newspaper A Bola has an update from today’s edition, as cited by Sport Witness.

They don’t think City are in for Florentino anymore, after signing Rodri in the summer. That would give United a greater chance at landing the midfielder with the Premier League champions opting for the Spaniard instead.

But that doesn’t make it any easier for United, really. Florentino has a buy-out clause of €120m and the player is apparently keen to make a name for himself before moving abroad. That can happen quicker than he thinks, as seen with Joao Felix who left the Eagles for Atletico Madrid in the summer.

United were also linked with Felix but he went for a lot of money. With Ole Gunnar Solskjaer still trying to build his team for the future, there’s no room for luxury signings. He needs something to build on and we’ve had a challenging start to the new season.

The more senior players at United need to show they can lead the way for younger arrivals. Daniel James and Aaron Wan-Bissaka have done brilliantly, like Harry Maguire, but the lads who have been at the club are still performing like they don’t need the required standards at Old Trafford and that’s very disappointing.