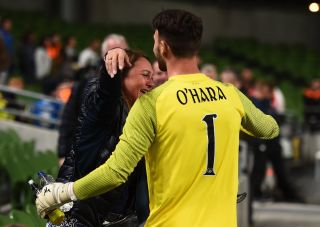 As we come to the end of another international break, there’s a few more updates to give you before the lads return for club duty and a difficult Premier League encounter against Leicester City.

Serbia picked up all three points in their 3-1 away win over Luxembourg. Fulham’s Aleksandar Mitrovic scored two of the goals, while Nemanja Matic was dropped to the bench for the match. He came on with over 10-minutes remaining though, adding another international cap to his name.

At 31, footballers usually slow down when it comes to international football but Matic isn’t featuring a lot for United and could do with all the game time he can get whilst away. Maybe head coach Ljubiša Tumbaković is doing similar to Ole Gunnar Solskjaer by planning for life without the midfielder. He’s kicking on and hasn’t looked a shadow of his former self for the past year.

It was a big win for England (as expected) over Kosovo, who’s manager acted like a bit of a loon on the touchline. It made for interesting viewing, even though Marcus Rashford was benched for the brilliant Jadon Sancho.

The young Borussia Dortmund winger needs to be on our transfer list this coming summer. It might be a year away from now, but he has what it takes to light up Old Trafford. It’s expected that whoever ends up with his signature will have to fight off interest from all of Europe.

However, Harry Maguire started in the 5-3 win and gave away a penalty to the visitors. Hopefully he can put that behind him before the Red Devils take on the Foxes this weekend!

Perhaps the biggest success story of the night came for United’s Academy star Kieran O’Hara, who is on loan at Burton Albion. He replaced Bournemouth’s Mark Tracers to make his senior debut for Republic of Ireland. They beat Bulgaria 3-1 in a friendly and he kept a clean sheet after coming on in the 75th minute.

Elsewhere, Marcos Rojo played the full 90 minutes during a comfortable Argentina win over Mexico in San Antonio. The game finished 4-0 as Luataro Martinez netted a hat-trick, before PSG midfielder Leandro Paredes added his name to the scoresheet from the penalty spot.