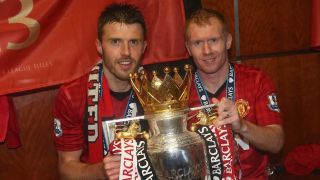 Carrick is one of many former United players involved tonight, along with the likes of Paul Scholes, Gary Neville, Ryan Giggs and Robin van Persie.

Van Persie scored the second goal for the Premier League All-Stars, while Scholes produced a classy no-look pass Ronaldinho would be proud of.

Still, it’s Carrick who really caught the eye in the friendly match, so it makes you wonder if he could do a better job than some of the midfielders we’ve seen in Red this season…

Scholes is another player you’d put in the same boat, even though he retired longer ago but it says a lot about the standard of players currently at the club. They’d still be relying on Scholes if he was playing.

Here’s some of the reaction to Carrick’s performance in tonight’s charity match-up.

Micheal Carrick plays better than pogba. He's so good even at his age

United would be better of with Carrick instead of Pogba #RollsRoyce

Carrick is going to have to do a Scholesy and come out of retirement, still better than all our midfielders

Carrick performing better today than Pogba has all season, lmaoooooo

Of course, the former players wouldn’t be up to the pace of an actual Premier League match, but could they do any worse than some of the players in the starting line-up for Saturday’s match against Leicester?