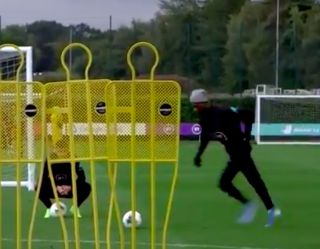 The 21-year-old has been left out of Gareth Southgate’s starting eleven for the game at St Mary’s, with Borussia Dortmund star Jadon Sancho taking his place.

Rashford has come under some pretty hefty criticism amongst United supporters in recent weeks after underwhelming performances against Crystal Palace and Southampton.

There is a recognition that the youngster may be better suited to playing out wide, where he has more time and space to run in behind opposition defences.

Anthony Martial has looked better suited to the central striker role early on this season.

The rest for tonight’s game is beneficial to Ole Gunnar Solskjaer, who will be hoping to have him fresh and firing for Saturday’s game against Leicester.

See Rashford score two free-kicks in a row past Burnley’s Nick Pope below. We just wish he could start taking them like that in United games!